So, I met this guy recently and for a moment I thought things could be turning around for me. We enjoyed a week of back and forth messaging and he seemed super keen, so naturally we got off tinder and exchanged numbers. I’ll admit he was lovely, super sweet, a little shy and most importantly he had a beard – I love a man with a beard.
We went on our first date and it was great, a coffee date turned into dinner date and I was left feeling really positive. Finally a date with someone who I was attracted to, someone I could laugh with and someone who didn’t come on too strong.

Cut to a week later and my overthinking Virgo brain went into overdrive big time. Our texting started to dwindle a little bit and I could see something was up. So being the stubborn girl I am I thought ‘no way am I chasing you buddy!’ and I spent an entire week thinking this guy wasn’t into me and it all just seemed a little off. My poor bestie had to listen to countless hours of me making up scenarios or possible what ifs and all in all it was a mental head fuck and I was left thinking, is this even worth my time when it’s so early on?…….

Which brings me to the point of red flags.
A red flag is something that doesn’t feel right to you. It can be something they’ve said or their behaviour. When you start seeing someone you have those beautiful love goggles on and you think ‘this person is amazing, they are so perfect for me’. But in reality, you could be ignoring some major red flags and there’s nothing like hindsight to make you see them. It’s really important to understand who you are and what you are looking for in a person you want date.
If you are anything like me who loves to work out, eat healthy, be in bed by 9pm, get up early on the weekend and hit up a café for breakfast followed by a trip to the farmers market……. then someone who drinks and parties non-stop may not be for you (bearing in mind being a drunk persons chaperone every weekend is just as tiring as being on a bender).  So maybe that’s a flag you would need to analyse.
Or the guy that makes you feel like you are 100% in a relationship but is still hitting up Tinder or Bumble and texting his side chick, again maybe that’s a flag.. No one wants to be any bodies fool. Or maybe that person that’s clinging on to something that really isn’t worth their time or energy.

Dating is about taking time, time to get to know each other.

There is no need to rush and there seems to be a lot of rushing, a lot of people that are really pushing to lock you down, like we are on some sort of time frame.

I know I am a catch. I will give them that. But after one date…. talking to me about moving to another state with them for work isn’t going to work for me. Constantly discussing their bitter break up but insisting they are truly over it or even the person that that sends you borderline abusive texts all because you needed to reschedule a date. These are all red flags!
They are easy to see early on if you understand what it is you are looking for in someone you want to date. And look, there is nothing wrong with being head over heels for someone, its lovely ….. I am all for love!

But if you are dating someone or even just hooking up and that person is displaying or saying some things that make you feel unworthy, confused, mentally drained or like they are playing games my advice is to give it three days. Take some time out and think ‘is this person enriching my life or draining me?’ I recently took a step back and thought, if this person wants me in their life then they will show me.
Sometimes they show you by not ever texting you again or they think, ‘hmmm I haven’t heard from blah blah for a while, I will send her a text’.
People will always show you their red flags, you just have to really look at how they treat you, speak to you and make you feel.

Ps. enjoy these screen shots from an ex red flag. 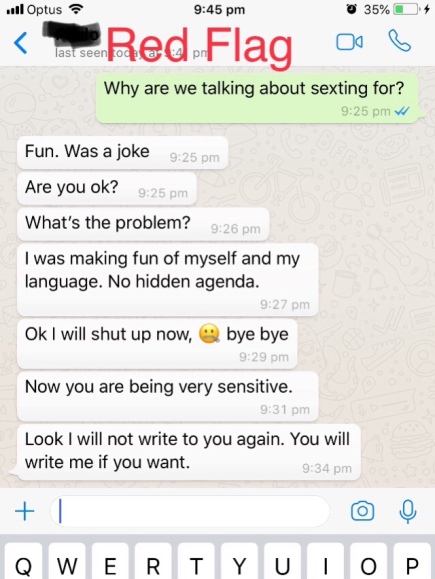 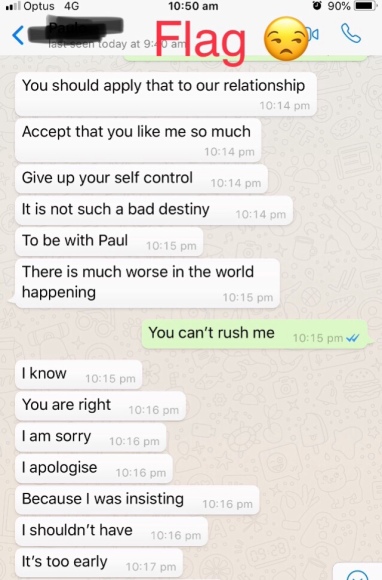 Dating. It’s a word we all know and use, but do we really know what it means?
I’m a single 27-year-old and by now, I’ve seen some things.
Hell, I saw some things years ago, when I was much younger. I admit that some of those things were red flags, which I blindly ignored, probably because I didn’t want to ‘rock the boat’ or appear to be a ‘psycho’.
Psycho – you know that word men love to throw at you, when you make a simple request like, ‘maybe clean the toilet before I come over later?’ –
I’m sorry, but guys come on, some clean sheets and a quick tidy will impress a woman more than having to sleep on a dog hair ridden bed.

I recently ended a relationship with a guy who I loved and foolishly saw a future with.
It just so happened that he was moving to Canada for a year which was actually a compromise because he had originally wanted to go for two years. We had been dating for six months before he left to go, and for that six months it was like a grey angry cloud that loomed over our relationship.
I will admit that I never discouraged him from going because I was of the belief that he will miss me SO much, that he’ll come back to me and we will be happier than ever. What’s the saying? ‘Absence makes the heart grow fonder’?
To cut a long story short I waited faithfully for six months to see him, travel to him and have a beautiful holiday with him, only for us to break up in the middle of a street somewhere in Vancouver after he admitted to cheating on me.

So…. like any boss bitch would do, I grieved for that relationship and then moved on with my life.
Because let’s face it, why cry over a man that it doesn’t work out with?
If it was never going to work, he took the trash out for me- so thanks sweetie…

Much like every other millennial – I got back out there, and when I say ‘out there’ I mean Tinder.
You know that wonderful geo matching app that makes you feel like a piece of meat and for some reason guys just want to send you pictures of their junk at 3:40 in the afternoon?
Like, OK buddy – not all of us want to see that.
My friend, who is now engaged to a lovely guy, has been advising me, ‘G- please change your profile to read that you are looking for a relationship, It’ll help weed out the ones that are just after a hook-up’.
Well, you would think so hey?…… NO! It doesn’t.

So being the ball buster I am, I stepped up my dating game.
I match with them, we chat for 2.5 seconds and I be upfront.
I say, ‘I am not into the hook-up thing because I am worth more than that’- And trust me, if they don’t like that, they un-match you very fast.

Anyway, recently I have become a little smarter about my dating life, sure…
But I ask, when did it become ‘slutty’ to date more than one man at a time?
I am not talking ‘super fun sexy’ time either. I mean going for dinners, drinks, hanging out on the grass looking at the clouds (did that recently on a date, really sweet).
I want to be wooed and have a man think im not always there waiting by my phone for when they text or call and I want them to think I have a life.
Little hint, they love when you have your own stuff going on, a busy woman is attractive.

And also, why are we putting all our eggs into the one basket? Because I know for fact they aren’t just chatting to the one girl.
But yet as women we seem to meet a guy and then that’s it!! We invest all of our energy into him, we rehearse our wedding vowels (to ourselves) in the mirror,  until he ruins it by giving us major red flags.

So currently, I am chatting to a few guys, arranging ‘non sexual’ dates and keeping my ‘texting language’ very neutral and non-committal. So far it seems to be working.
Yes, my social calendar is busy trying to arrange dates.
Yes, it’s a little overwhelming –  but so what?

I cap my dates to a maximum of four hours because I have a life, but more importantly, I want them to know that I am not just going to be there all time.

And yes, I am doing this all with what feels like NCIS precision.

But I am playing a smarter game. Because it is a game and that’s not a bad thing.
It’s a fun game where the end prize is love and we all want to be loved.
Dating is fun, and it should be.
I like to go for drinks and get to know a man, treat it like you are interviewing that person for the role of potential partner, (they are doing that same thing to us).
And we all know that you don’t just hire any idiot that walks in off the street.

So ladies, I encourage you to get out there and stand up for yourselves.
Know that you are beautiful and you should be treated like the queens you are.
And stop settling for mediocre dates, guys not texting you back, and Tinder dick pics.